“Neither rain nor fog nor little dogs…” 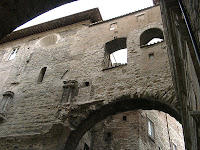 Unseasonly mediocre weather has dampened spirits around Perugia these days and so staff member Zach Nowak did not expect much of a turnout for his Perugia Nooks & Crannies Tour. The guided tour intentionally eschews discussions of art and political history, focusing instead on anecdotes and entertaining stories about Perugia’s lesser known inhabitants and visitors. The first tour, which began at noon under persistent rain, was attended by fifteen students. The second, though, had a record fifty-two.

The participants trekked up and down Perugia’s hills and heard stories about the Salt War (subtitled “Why The Bread Here Is Terrible”), Mussolini’s March on Rome (which started at a famous Perugia hotel), and of course the orphanage where so many people named Alunni came from. Nowak will hold his tour one more time next week on Sunday – signups are in Via Mazzini.