No Nooks Unturned! No Crannies Missed! 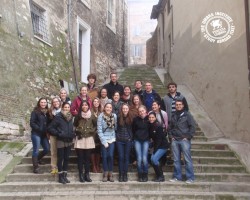 After their first week in Perugia, 22 brave students took part in Umbra’s Nooks and Crannies walking tour. Undaunted by the thick veil of fog, they were guided by charismatic staff members, Cat Tartaglia and Gina Fabbro, through Perugia’s fascinating and oftentimes obscure history.

From the Salt Wars (and Salt Jesus!), to the Rainieri’s street cleaning pigs of bygone days, and all the way up to the highest publicly accessible point in Perugia (hello Via Aquila!), the students now know a little more about the historical city where they will reside for the next semester.

Another tour – for those who missed it the first time – will be announced in the coming week.