Studying Abroad through the Mountains of Saint Francis 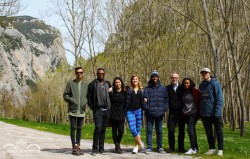 Prof. Paxton and the HIS 360 class pose for a picture in Furlo Park after learning the importance of the Furlo Gorge

This semester, Connecticut College professor, Fred Paxton, is leading a faculty-led program which offers students the opportunity to take courses in: HIS 232: Later Middle Ages: Christians, Muslims, and Jews, ca. 900-ca. 1500 and HIS 360: Perugia, Etruria, and the Deep History of Italy at the Umbra Institute. During this past weekend, Paxton led HIS 360 students to Gubbio, where they viewed the nearby Bottaccione Gorge, to Furlo Park, and to Urbino.

The first half of the trip was spent trekking near Gubbio’s aqueduct to observe how limestone and the formation of the earth tell the planet’s history. Students were taught the significance of red and white limestone and how to recognize the signs that mark the arrival of the Apennine Earth storm near Gubbio. At a later stop, Professor Paxton shared what he noted as the mark of where an asteroid hit the earth at a location where 20 years of research resulted in the evidence of an extinction.

As the trip continued, students viewed the cliffs and colors of the Burano Gorge and the Furlo Gorge before their final stop in Urbino. Upon the group’s arrival in Urbino, the trip seemed to fast forward as students visited the Palazzo Ducale, Ducal Palace, where they reviewed the history of Urbino, Marche, and the non-church controlled regions of medieval Italy.

Hands-on learning and exploration represent the cornerstone of Umbra’s educational philosophy. To learn more about leading a faculty-led program at the Umbra Institute, click here.