The Umbra Institute’s Food Studies Program (FSP), now in its fifth semester, has always had an active faculty. Two of the professors, Elisa Ascione (Sustainable Food Production in Italy) and Dario Parenti (The Business of Wine) traveled in August in preparation for this semester’s teaching. 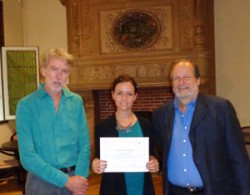 Ascione, the lead professor and coordinator of the FSP, attended an intensive, week-long series of seminars in Tours, France. The seminars were coordinated by food studies scholars Peter Scholliers and Allen Grieco and hosted by the Institut Européen d’Histoire et des Cultures de l’Alimentation (European Institute of Food History and Culture), the premier European organization for scholars who study food. Ascione presented her paper on the second day of the round of seminars and received a certificate of participation at its conclusion. 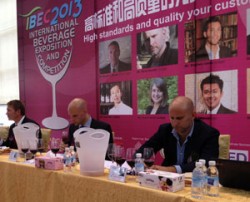 Parenti, who is in addition to being a professor is also an enologist and a consultant for exportation and marketing of Italian wines abroad, was invited to be a judge at the International Beverage Exposition and Competition in Shenzen, China. Parenti participated in eight-person panel, which judged wines from all over the world.

Above: Elisa Ascione with Peter Scholliers (l) and Allen Grieco (r). Right: Dario Parenti (first from right) at the IBEC.