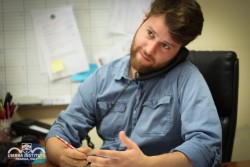 Marco Bagli, Student Services Co-coordinator for the Umbra Institute, was recently awarded the Young Researcher’s Award at an international conference in Pavia. Marco is a PhD candidate in English Cognitive Linguistics at the University of Perugia, with an interest in Cognitive Semantics, Semantic Categorization, and Conceptual Metaphor Theory. For his PhD project, Marco is investigating the conceptualization of the sense of Taste in the English language – for example, why does one call a loved one “honey” or refer to sarcasm as being “bitter”.

The Young Researcher’s Award was a competitive award granted to three students selected from applicants coming from different countries throughout the world. Marco, along with two post-doc students one from Spain and one from France, were selected for the award based on the scientific quality, innovation, clarity, and disciplinary relevance of their research. For this particular award, Marco’s research dealt with the semantic categorization of Taste words in English, which was carried out at the Umbra Institute with the participation of some of the Spring 14 students. The conference focused on ‘Figurative Thought and Language’ which is “not something that only pertains to poetry or literature, but human beings speak and think figuratively on a daily basis without noticing it. We constantly make use of metaphors and metonymies, even if we don’t know”, Marco explains.

In January, Marco plans to continue his studies by moving to Glasgow for four months to work with Dr. Wendy Anderson at the School of Critical Studies. Thanks to an Erasmus+ grant, a European project designed to enhance student exchange in Europe while fostering an intercultural, European identity, Marco will be looking at the historical development of the conceptualization of the sense of Taste in the English Language