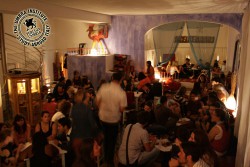 In June 2012, University of Perugia students Matteo Agostinelli and Giovanna Di Matteo met and swiftly fell in love at Tandem, an Umbra-sponsored event at which American and Italian students trade languages. At tonight’s Tandem, the couple will celebrate their first anniversary. Read Giovanna’s recollection of their meeting one year ago.

Once upon a time, a friend of mine, Manuela, called me and asked me to go with her to a Tandem organized by the Umbra Institute. I had never heard of it, but I was interested and had nothing to do so decided to join. I could not imagine how important that easy decision on that common day would be.

We arrived at 19:30. I was a little bit embarrassed because it was my first time there, and I did not know how to behave. Soon I discovered that it was a very informal situation. A seat was assigned to me, and I was acquainted with two American girls and an American guy. At the same table, there was an Italian guy named Matteo. At the beginning, I did not attach importance to him. I was concentrated on the American girls. It was fun, I spoke a lot with them. They could speak quite good Italian — I enjoyed the conversation!

After a while, the Italian guy started to speak with me. I thought he was quite strange but at the same time pleasant and funny. He tickled my fancy, but in that moment I could not understand why! At the end of the Tandem we rattled on. He was amusing, but I don’t remember what we spoke about. I can just remember a friend of his was speaking with Manuela about the Italian graduate system, but I was not involved in the conversation because of that curious guy.

Matteo asked me about my summer plans. I said that unfortunately I had to stay in Perugia the whole summer because of a job with the university. I was quite sad because all my friends went home during the summer holidays and I had to be alone. At the beginning I thought he was joking when he said that he wanted to stay in Perugia too, so maybe we could spend together the summer — now I know that it was true. He stayed with me during the summer, and we are together even now — and maybe we will still be for a long time!

Today’s Tandem will be at 7:30 p.m. at il Birraio. Come meet new friends (and even fall in love) while practicing your language skills. Don’t forget to wish Matteo and Giovanna a “buon anniversario!”